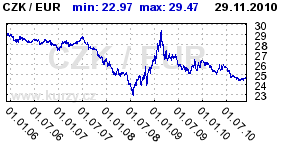 Just few days ago, Petr Nečas, the Prime Minister of the Czech Republic, declared that the floating exchange rate helped the Czech Republic to handle the recent crisis (FT). It would be really intriguing to know, whether he was analysing a briefing for Richard Nixon from 1973, or he actually looked at what happened between the Czech crown and Euro in last years.

From summer 2007, the Czech economy suffered from appreciation of the Czech crown (CZK) to the euro and dollar. This wasn’t caused only by the positive balance of trade, but – above all – by the foreign exchange market. The crown has reached its historical maximum in summer 2008 after a slight speculative attack, which didn’t have anything to do with the crisis, as it happened before the world  realised there was actually one.

The following depreciation was in 95% a return to normal values reflected by the net exports before and after the unusual rise of 2008 and would have happened even without the crisis. [1] The new appreciation of the crown in 2009 and onwards put the Czech republic rather in a difficult position and resulted in a slower recovery.

Floating exchange rate may help countries to protect their economies, in the case of the Czech Republic and the recent crisis however, it apparently did not. If Messrs Nečas and Klaus aim to verify, whether the crown is going to save the Czech economy during the next global crisis, than I wish them good luck indeed.

[1] Slovakia locked itself in the summer position, because it pegged the Slovak crown to euro during the slight speculative raid on both currencies in summer 2008. This is an unlucky timing, but it wouldn’t have happened to the Czech crown, if it had pegged its rate basically anytime else.