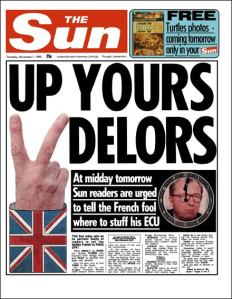 According to the revived version of the intergovernmentalist theory described by Moravcsik’s, the principle of domestic preference formation would force governments to act on European level only when they pursue common interests or when a given inefficiency may be resolved more easily by coordination. These acts are rational, since without significant reasons for transfer of competencies, any assignment of inefficient competencies would not take place.

For instance the Single European Act (SEA) was implemented mainly for purposes of economies of scale with a very little encroachments to those policies, where these economies would be insignificant or impossible. The SEA limits itself on removing barriers and increasing thus only procedural freedom as described by Amartya Sen and circumvent any redistributive actions. Its impact is completely Pareto-efficient and very few arguments may be raised from national-interest positions to oppose it. Moreover, the theoretical principle of subsidiarity, which was introduced thereafter in the Maastricht Treaty, has transformed this principle into a rule. It is hence explicitly given that the transfer of competences takes place only in situations where necessary and rational.

If you wish a full version of this article with bibliographical notes, contact me here.

There are significant differences in bargaining powers between states, which lead to disproportionate results. It seems plausible that some states accept policies under political and diplomatic pressure rather than by rational public choice.

Already during the establishment of the European Coal and Steel Community (ECSC), significantly different bargaining positions led to different outcomes for member states in economic and political terms. Germany sought merely diplomatic and political recognition, while French had important economic interests in the coal region of the Ruhr and wanted to prevent any potential conflict with Germany. The same logic of illiberal intergovernmental bargaining apply in the case of power imbalances, e.g. when the UK attempted to scrap the CAP before actual accession to the EU but had to abandon the agenda swiftly because of its weak negotiating position.

Once in place, inefficiencies may than be maintained by veto players both on the level of the European Council (de iure veto and de facto unanimity decisions in important national questions), national Parliaments (lengthy ratification process) or even by electoral bodies (referendums or social pressure), which lead to perpetuation of these seemingly irrational policies through a simple two-level game.

This presents clear limits to the argument of economic efficiency, but not to rationality. All the states had acted in special circumstances and have made political concessions to defend their economic interests or vice versa. Moreover, some policies were inefficient and to some extent irrational, but the mere assignment to the European level is not irrational as pursuing of some policies by Member States on their own (e.g. agricultural policies) would very probably lead to even bigger inefficiencies and irrationalities (for instance competition towards higher agricultural subsidies). For these two reasons, almost all assignments of policy functions to the EU under the light of intergovernmentalism are rational.

The illusory domino effect of spillovers

There is, for instance, a clear and logical linkage between the establishment of the CAP, consequent problematic setting of commodity prices, monetary snake and finally the EMU. The loose rules of the Stability and Growth Pact have led to the 2010 Greek crisis and may lead to a further economic and fiscal integration. Asymmetric shocks are likely to become more frequent in the EMU and Europe as such, since Eurozone is not an optimum currency area. One would argue that the European monetary integration might therefore be seen as a set of automatic and irrational steps.

However, the intergovernmentalism has made clear that spillovers’ effect lacks necessary automatism or inevitability. Every step of the European integration is put under a thorough scrutiny of many actors and there is no significant automatism from one step to another. Even if a precedent step may make the next one more likely, it is probable that any further purely irrational step would not be pursued.

If political and economic factors are taken into account, very few or none of the assignments of policy functions are in fact irrational. If we observe the European integration and incremental assignment of competencies to the European institutions, it is a deeply premeditated and controlled process, which may easily produce errors, but is far from irrational.